On my final day in Auckland I did the Hobbiton + Waitomo Caves day tour with Greatsights. I was picked up by a bus which seated at least 40 passengers. The tour was overpriced at 357 NZD, but I was short on time and really wanted to see both places. In the end my options were pay up or miss out. 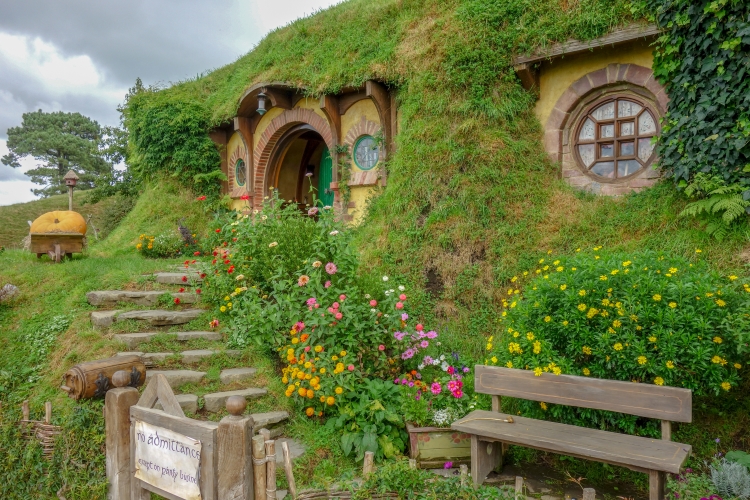 Greatsights gave us stickers to wear on our shirts before we alighted the bus at the Hobbiton entrance at the sheep farm in Matamata. They then herded us into the souvenir shop with no further info. Perhaps I fell asleep and missed instructions on the bus to Matamata, but my fellow tour members seemed equally confused. Ironically a door mat in the souvenir shop said not all those who wander are lost in golden letters on a blue background. This was mass tourism at its finest.

About 45 minutes later we were told to hop on a local Hobbiton coach which took us from the souvenir shop to the movie set. You can only visit the movie set on a guided tour with a selected time slot, even if you drive to the farm yourself. We walked around the Hobbiton village in a group of 20 people with one guide.

I had mixed feelings about my visit to Hobbiton. The attention to details was impressive, they did a good job with the village. I enjoyed walking up and down the hills. At times it felt like being in the movies, and there were even some hobbit holes you could step inside for photos!

On the other hand, the set was overcrowded and the tour was rushed to the detriment of the experience as tour groups repeatedly caught up with each other. I was also unimpressed by our guide. He was passionate when telling stories about the movies and the set, but visibly annoyed when all vistitors in the group wanted self portraits at the most iconic hobbit holes.

We only lined up for photos at two locations, but that was too much for the guide who signalled can we get this over with. It was such a contrast to our funny and friendly guide on the Cathedral Cove tour who loved his job and wanted us to have the best experience.

I would had preferred to roam around freely, but the movie set would probably got destroyed if people were allowed to do that. We ended our tour with beverages at the Green Dragon pub, where I chatted about cherry blossom locations with two girls from Tokyo. Overall I really liked the movie set in Hobbiton, but not the tour. 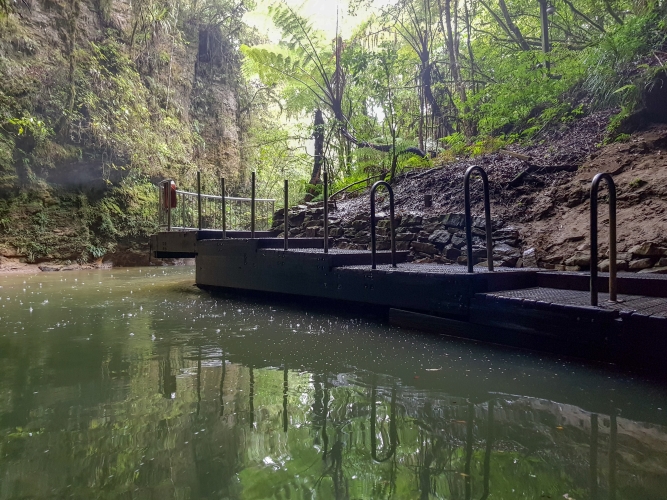 My tour group then continued to Waitomo Caves where it started to rain. I was glad it wasn’t the other way around, here at the caves we would be inside watching glow worms. We walked down through the underground and then took a seat in a small canyon-like boat where we floated in a dark tunnel with glow worms above us. My experience was lessened by children who screamed at each other in the darkness. It was not what I had expected, but I think this could had been magical with the right circumstances (everything being quiet). The glow worms didn’t shine nearly as bright as in the tour folders though. We were not allowed to photograph inside the caves because it would disturb the glow worms, so I only have a photo from when we exited the cave.

This tour was definitely not value for money, but I was happy to see both places on the same day. My next stop was the little town Wanaka on the south island.