Before I visited New Zealand there were two places on the absolute top of my bucket list – Roy’s Peak and Cathedral Cove. I had booked a day tour to Coromandel (including stops at Tairua, Cathedral Cove and Hot Water Beach) in advance since I only had four days on the north island. These kind of tours often have a minimal participants number which has to be reached for the tour to go ahead, or else it will be cancelled and refunded. The tour company sent me a cancellation email the day before the tour. I was devastated (it was my only possible tour day), but decided to not let it affect my mood on Waiheke island. When I got back to my hostel in Auckland I sent an email to the tour company lately after midnight and wrote I was really sorry to hear that but appreciated getting the info early and that I looked forward to them transferring the tour fee back to my bank card. 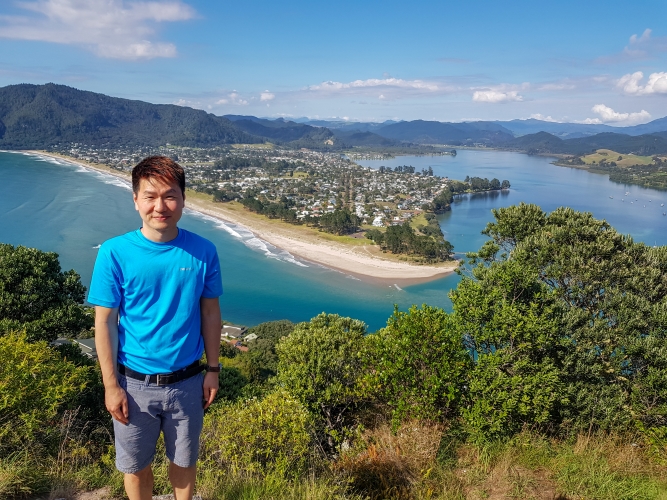 For some reason I woke up early at 7.20 AM the following morning. I instinctively glanced at the screen on my phone where I had two email notifications, the first of which said Urgent, tour still going ahead with an apology and a question if I still could make the tour that morning (the tour company had messed up their auto-emails). I looked at the watch, noticed I had 15 minutes to get ready, and replied with a short and simple Yes, I can. A few moments later (after packing swimwear and cameras super fast) I was seated in the tour minibus for one of my dreamiest, happiest, best days ever as my Cathedral Cove dream DID come true!

Our driver/tour guide was a great guy, but he spoke with a profound New Zeland accent so I found it difficult to interpret some of the words he said. When we stopped for breakfast I told one of my tour mates I don’t understand what he says. She was from US but replied with a sympathetic neither do I. After a while I realised New Zealanders pronounce vowels differently (for example e as i) and I enjoyed the stories our guide told us now that I could understand them.

Our first stop was the Mt Paku summit in Tairua. It was my greatest location surprise in New Zealand, one of the hidden gems I missed when I did my research before the trip.

We then drove to Cathedral Cove. This place was heaven on earth. I only walked 20 metres on the path until I fell in love with New Zealand, on my third day.

The beach was even more beautiful.

It was easy to see why this place was used as a setting for one of the Narnia movies.

We got plenty of time at Cathedral Cove. I loved swimming in the high waves on the beach at the Te Hoho Rock side.

When we walked back to the car park I ran the last bit to get extra time to take photos from the lookout.

Hot Water Beach was the last stop on the day tour. Our guide brought shovels and showed us where to dig our own natural spa pool. It was a fun experience, but the water was too hot for me. I chilled myself with a brief swim in the sea before we left. Exhausted from a long day of amazing adventures I slept like a little kid all the way back to Auckland.